Can you please provide a little introduction about yourself

Hi, my name is Ray Estevez. Thank you for the opportunity to share my journey and experiences. I am a proud Latino, husband, father, data and technology innovator, and budding angel investor. Currently, I am the CIO at True Influence and am based out of Marlboro NJ. I’ve been with True Influence for 3 years and am responsible for managing global IT operations.

What has your journey to your position been like? What path have you taken?

My journey to the C-suite has been a rollercoaster of failures, learnings, perseverance, losses, business exits (successful and not so successful), wins, and incredible business relationships. The path was a bumpy one with many challenges, obstacles, and prejudice. My educational journey started at The City College of New York (CCNY), were my advisor suggested I try computer science. Lucky for me, I truly enjoyed it and received my Bachelors’ degree. My professional career began at JP Morgan and evolved with stops at Time Warner, Time Inc, ConsumerNet, 24/7 Media, ORB Inc., V12 Group, V12 Data, and True Influence along the way. Key milestones include experiencing racial prejudice and being passed for an officer assignment at JP Morgan. That eventually pushed me to look for an alternative path for my determination. Joined Time Warner and helped them build a new $250M division selling music CDs via direct mail. After helping Time Inc establish a 24/7 state of the are network operation center (NOC), I decided to leave corporate America and take a chance with a small startup. I eventually was promoted to CTO of ConsumerNet and helped developed one the first email marketing databases, which led to the company being acquired by 24/7 Media. A few years later I co-founded V12 Group and served as the CIO for 14 years until it was acquired by Datamentors in 2016. In 2019 True Influence hired me as their Chief Data Officer. Eventually, I was then given IT management responsibility and was named CIO.

No not really. I just wanted to be a good technologist and programmer. Achieving a CTO/CIO role was somewhat accidental. My boss (Joel Sanders) and early mentor at Time Warner truly believed in me and supported my development. He taught me how to be a good manager, leader, and mentor. Once I realized that I could achieve a much higher level, I just continued to learn and sharpen my technical and soft skills. With hard work and determination, I was able ascend to the role of CTO at ConsumerNet. Once you achieve a certain level, you must fight hard to maintain it.

Have you had a role model or mentor that has helped you on your journey?

Absolutely! I have had several mentors along the way. My mother (Matilde Estevez), who ruled with an iron fist and kept me on a straight line while growing up in the hood (Harlem NY). My 6th grade teacher (Ms. Hobbs). Ralph Evans at CCNY who pushed me to try harder classes in math and computer science. As I stated previously, Joel Sanders is my most influential mentor in business. He was a great teacher, mentor, and human being. He saw my potential and molded me as an IT Engineer, IT Manager, and then IT Director at Time Warner.

How do you see the role of the technology leader evolving over the next 5 years?

Technology leaders have evolved into technical innovators and business leaders. CTO/CIO are starting to step out of the C-suite and are now in the board room as board directors. I envision more technology leaders being tapped for CEO spots in the future.

What skills do you think leaders of the future will need in order to thrive?

New technical skills (Data Science, AI, Cybersecurity, Robotics) will be critical. However, they will need to master business acumen, data privacy/compliance, and soft skills to keep pace with the ever-changing business landscape.

How do you keep current with new skills, technologies and personal development?

I am always reading and researching new technical innovations like blockchain, quantum computing, AI/deep learning, NFTs. As for my personal development I continue to expand my mentoring efforts, improving my listening skills, and giving back to underestimated communities. I am proud of the work we are doing at “America On Tech”. Also, I am a big user edx.org and LinkedIn learning.

What do you see as the next leap in technology that will impact your business or industry in particular?

I truly believe AI is still in its infancy. We’ve just started to leverage its potential. On the computing side, I think quantum computing will accelerate our capabilities by 20 years. Both will continue to bring dramatic advancements in transportation, space, exploration, predictive analytics, and simplifying global communication.

If you were mentoring a leader of the future, what advice or guidance would you give to help them on their way?

My advice to them would be to become better listeners, learn to lead with empathy, never stop learning, develop and nurture new leaders within your team, and never be afraid to fail.

Is there anything in particular that you would still like to achieve in your career or what is the next step on your journey?

Someday day, I would love to run my own company. Also, I am learning and preparing to be a board member of a company that is making a positive impact on underserved communities.

If you could change one thing in the world, what would it be?

Only one thing? I have two things dear to my heart, but if I must choose just one, it would be to find a way to end world hunger. I truly believe this can be today. We just need the world’s largest corporations, the wealthiest people (1%), and richest countries to came together to leverage existing technology, food/agriculture innovation, and wealth. By doing this we can end world hunger within 5 to 10 years.

A big thank you to Ray Estevez from True Influence LLC for sharing his journey to date.

If you would like to gain more perspective from Tech Leaders and CIOs you can read some of our other interviews here. 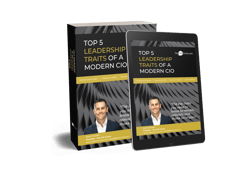 Top 5 Traits
of a Modern CIO

The role of the CIO is evolving, learn the traits of a modern CIO and get access to our free membership.